7 Top Student Loan Moments From the Past Decade

2019 has come to an end, which means it’s the end of another decade. The past 10 years have been staggering in terms of changes to the student loan system. From 2010 through 2019, student loan debt reached an all-time high, new repayment plans were introduced, and the Department of Education cracked down on for-profit schools. Here are seven of the most significant student loan moments of the past decade.

Income-driven repayment (IDR) plans were first introduced in 1994. With an IDR plan, federal loan borrowers could reduce their monthly payments, making the payments more affordable. But over the past 10 years, the Department of Education made significant changes to IDR plans.

In 2014, the national federal student loan cohort default rate — a measure of how many borrowers of Federal Family Education Loans or William D. Ford Federal Direct Loans defaulted on their debt — hit 11.5%, an all-time high. Of the millions of students who entered repayment, hundreds of thousands defaulted on their loans, meaning they didn’t make payments for at least 270 days.

According to the most recent data, the default rate has decreased slightly to 10.8%. However, student loan default remains a major issue for thousands of borrowers amidst the student loan debt crisis.

Over the past 10 years, several for-profit schools have been sued due to misleading tactics. Millions of students were left with student loans and a degree that couldn’t help them secure a job.

In 2016, then-President Obama’s administration announced new regulations that were designed to protect borrowers from institutional misconduct. Called Borrower Defense to Repayment, the new regulations allowed borrowers to have their loans discharged if the school was found guilty of fraud, or if the school gave the borrower misleading information.

Borrowers who think they are eligible can apply for Borrower Defense to Repayment online.

In 2017, the first borrowers became eligible for loan forgiveness under Public Service Loan Forgiveness (PSLF). While the program was launched in 2007, borrowers have to work for a qualifying non-profit organization or government agency for 10 years while making payments on their loans to be eligible for PSLF.

Was the program successful? That depends on your perspective. As of June 2019, over 90,000 borrowers submitted PSLF applications. But to date, only 1,216 applications for loan forgiveness have been approved.  That means 99% of PSLF applicants are rejected.

Student loans are more prevalent than ever. According to The Institute for College Access & Success, 65 percent of college seniors who graduated from public and private colleges in 2018 had student loan debt. On average, borrowers had $29,200 in student loans.

In 2019, President Trump signed a Presidential Memorandum to help totally and permanently disabled veterans with their student loans. With the new process, the Department of Education would automatically forgive the federal loan balances belonging to eligible veterans under Total and Permanent Disability Discharge.

Previously, veterans could qualify for Total and Permanent Disability Discharge. However, the process required veterans to know about the program and fill out extensive paperwork. Under President Trump’s order, their loans were eliminated automatically, simplifying the discharge process. 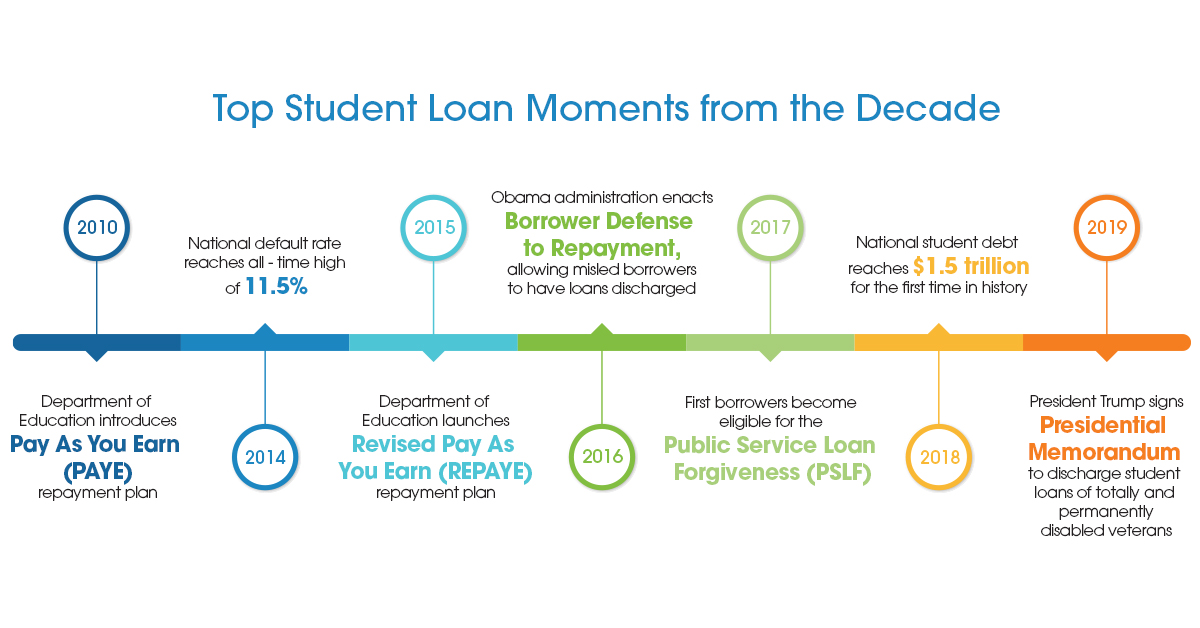 Timeline depicting the top student loan moments from the past decade.

The past decade produced major changes to the student loan systems. As the 2020 election nears, more and more politicians will be paying attention to student loan issues since they impact millions of borrowers. Many presidential candidates will be introducing their educational policy proposals, which could signal new changes for borrowers in the next few years.

When to Recertify Income-Driven Repayment Before Student Loan Forbearance Ends
Should You Withdraw From Your 401(k) to Pay Off Student Loans?
How To Get Financial Aid For College When Your Parents “Make Too Much”
Physical Therapist Salary vs. Student Debt: Is It Worth It?
How Much Should I Contribute to My Child’s College Student Monthly Allowance?