For most people in the United States, the cost of going to college represents a huge financial burden. The Federal Student Aid Portfolio Summary, issued by the office of Federal Student Aid and quoting data provided by the National Student Loan Data System (NSLDS), states that as of Q3 2018 approximately 42.2 million people hold outstanding principal and interest balances on federal student loans. These loan types include Direct Loans, Perkins Loans and Federal Family Education Loans (FFEL).

It is important to know the facts about student loans before borrowing. The statistics overwhelmingly point to a growing debt problem. According to the Federal Reserve System, the amount of student loan debt increased by 5.6% in Q3 of 2018, when compared to Q3 of 2017. That may not sound like much until you discover this amount equates to roughly $83,482.32. 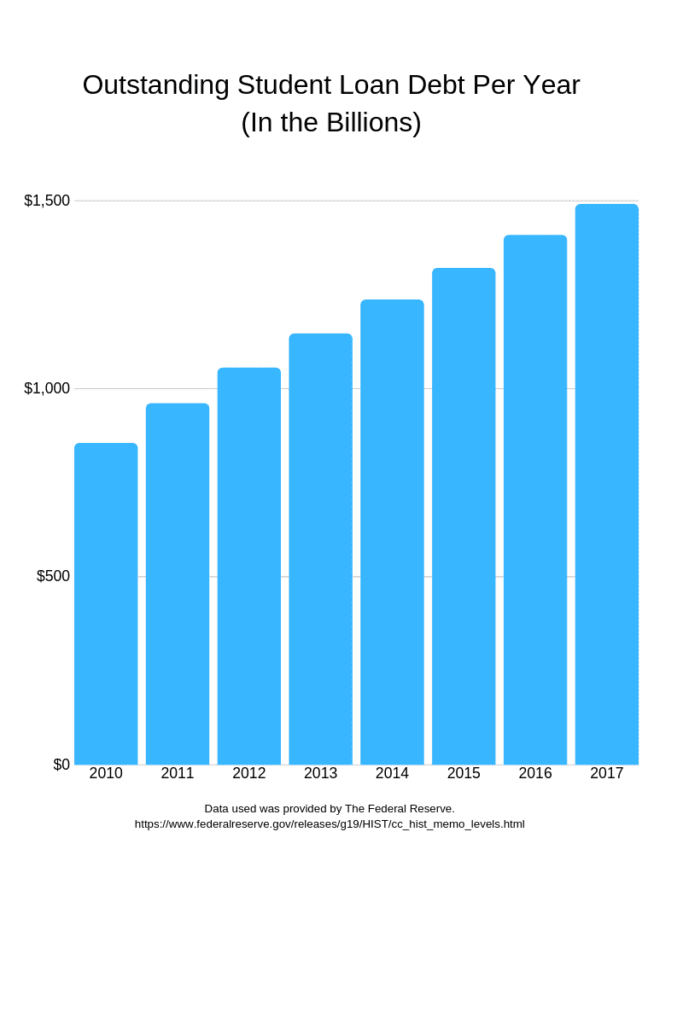 The facts do not get any easier to digest for college students in 2018. Whether they attend public or private universities, many students rely on loans for tuition and other expenses. If you are among the more than 42 million borrowers with outstanding student loan debt in the U.S., you might be interested in ways to save, such as through student loan refinancing.

Check Out Our Guide to Student Loan Refinancing

Here are some of the latest statistics to be aware of.

As noted above, debt associated with federal student loans accounted for nearly $1.5 trillion as of Q3 2018. According to the Federal Student Aid Portfolio Summary.

Outstanding interest and principal balances for Q3 2018 are as follows:

Debt management programs get a lot of attention these days. Given the student loan facts, you can see why. It’s important to note that a majority of student loans are in repayment.

The Direct Loan Portfolio by Repayment Plan report issued by the office of Federal Student Aid shows that several million borrowers with direct loans were in the process of repaying their loans as of Q3 2018, including

According to the Direct Loan Portfolio by Delinquency Status report from the office of Federal Student Aid, as of Q3 2018, approximately 3.35 million borrowers had loans in default, with loans totaling about $89.6 billion not yet being repaid. Of that default amount, a little under a million loans are so delinquent as to have been transferred to the Debt Management and Collections System (DMCS). According to this report, about 16.02 million borrowers with direct loans are current on payments, representing an estimated $570.5 billion in debt.

According to Student Debt Relief, students borrowed about $125.6 billion in non-federal and federal student loans in the 2010-11 academic year, a number that has fallen to $106.5 billion by the end of the 2016-17 academic year. The drop in money borrowed can possibly be attributed to fewer students attending college. In 2011 16.63 million students enrolled in college, but by 2016 that number had also fallen to 15.74 million in 2016. Fewer students enrolling in college could be the reason for the drop in money borrowed.

Debt vs. Type of School

Student loans are not limited to undergraduates. An increasing number of individuals pursuing graduate and professional degrees are borrowing for graduate programs on top of what they already owe for undergrad degrees, according to statistics revealed in “The Graduate Student Debt Review,” published in 2014 by the New America Foundation Federal Education Budget Project.

The bottom line is, if you are borrowing, then know student loan facts. You can get all the details from lenders or the Federal Student Aid website, an office of the U.S. Department of Education. Finally, review the payment terms and repayment plan options for any student loan you’re considering, including student loan refinancing alternatives, so you can choose a loan that best suits your income bracket, finances, and lifestyle.

NOTICE: Third Party Web Sites
Education Loan Finance by SouthEast Bank is not responsible for and has no control over the subject matter, content, information, or graphics of the websites that have links here. The portal and news features are being provided by an outside source – The bank is not responsible for the content. Please contact us with any concerns or comments.